23 [April]: In the morning, storm; thunder without lightning; slightly overcast sky. Early in the morning, a large snag struck the ship, and a thick branch forced itself into the cabin by carrying away the framework of the door. A large island. To the right, a fringe of willows and a sandbar; to the left, the wild forest in its most beautiful foliage; here very much redbud and buckeye grew, which were just unfolding their large leaves; the oaks were also blooming. To the left, several sandbars and then, following a narrow stretch, the large Isle aux Vaches (Cow Island) is off to our left, where in 1818 the troops destined for Council Bluff spent the winter; the winter caught them here by surprise. At 7:30, 67°F [19.4°C]. The heat yesterday had greatly quickened the sprouting of the vegetation; today the forest is very green everywhere. When those troops wintered on the island, they had so much game everywhere in the vicinity that they could live on it entirely. The Kickapoos will now be settled here along the left bank; their territory extends to Independence River. Otherwise there are no permanent Indian villages here in the region, although the Iowas, Sauks, and Meskwakis roam and hunt in these woodlands. To the right there was a particularly beautiful wild forest, especially wild and green; redbuds in great splendor; many white blossoms; large quantities of buckeyes, likewise sugar trees—the Indians, too, use its sap to make sugar. Numerous small, rugged paths and animal trails everywhere along the shore.[Page 2:33] To our left we still have Cow Island, more than 6 miles long and covered with cottonwoods and rushes. To the right in the forest, there are now rock clusters covered with colorful lichens; on the bank below, fragments of limestone. Everywhere the soft sand and clay of the shoreline is quite covered with tracks of deer; in the winter they lick holes in the bank.

The river now makes a big bend to the left around the end of Cow Island. The hills of the right bank continue straight ahead, and to the right we have a cottonwood forest. After several hours the outlet of a the Independence creek, narrow and insignificant, to the left but farther back is supposed to have a nice wide bed of rock. From here on, the river continues in a straight line and is very broad and stately; its forests, a soft green color on all sides, are most picturesque; wherever the bank is low, one can see green borders of willow on the outside. Podophyllum peltatum, with its large leaves, grew all over the forest floor, and the color of the redbuds was absolutely beautiful. In the distance before us, the river made a bend at a hill chain, which was bare on top and had very beautiful green prairie. At twelve noon, 77°F [25°C]. At 12:30, a creek to the left. Twenty minutes later we reached the row of hills that were bare of trees on top. They are covered on top with prairie. Magnificent redbuds on the hill by the water; the oaks and ashes are also blooming in abundance. To the right the floor of the tall forest is overgrown with a dense, 3 to 4 foot thicket of rushes, which form a green stripe in the landscape. The hilltops are barren. Already nothing but the prairie extends inward on the left side, but the valleys and ravines are still full of forest. Here there are mixed prairies, which form the transition. Ducks everywhere on the river, mostly the wood duck, which is very common here. The French call it canard branchu.

At lunchtime we halted and cut great amounts of wood. Imprinted in the soft soil on the bank [were] wolf and deer tracks; the black bear [also] is numerous here, as well as the wild turkey. Above on the tall bank, the forest soil was so densely blanketed with thick, tall rushes that one could not bring down a cane without breaking several; they were trampled down by our men into little paths running in every direction, and the blow of the axe echoed from all directions. The heat here was very intense, since shade was still insignificant. But the young, delicate, and light-green foliage was indescribably beautiful. Bodmer and Dreidoppel shot five parakeets, but they found nothing new or interesting. Short plants could not grow in this forest because the rushes (Equisetum) leave them no room.

One and one-half hours later, we continued on. Off the right bank, snags soon appeared [and] damaged the ship and the right wheel cover. Moreover, we drifted so swiftly from here against a deposit of trees in the water that the boat and the rudder were endangered. We turned in every direction, received severe jolts, did not find enough water anywhere, and struck bottom. Finally, after perhaps an hour, we found the difficult way over a sandbar. Here the forest was very green. Urubus were flying around above it. To the left the Independence River very picturesquely emptied into the Missouri from beautiful wooded banks. It is a brook like the Windbach and is said to have a flat bed of rock farther back. Beyond this outlet we had before us bare, naked hills overgrown with grass; before them, in a low-lying area, swamp and shrubbery, [and] an expanse [of] tall grass near the bank. In this region there was once a village of Kansa Indians. In earlier times the Spaniards always maintained a small post [there] with several soldiers. Nothing more is to be seen of this village, which, however, is indicated on the maps. The land here along the Missouri is excellent everywhere. Mr. Bodmer made a sketch of these hills with prairie. At this place there is no forest along the river for about half an hour, but then it begins again at the mountain face. Here masses of plum trees are in blossom, just like our European fruit tree, and the redbuds, just like our peach trees.[Page 2:34] Ducks (wood duck) here, in abundance, as well as the turkey buzzard, and on a sandbar opposite we saw an otter running.

The river now bends to the right; its banks are again completely wooded. Somewhat farther on, there are big sandbars to the left in the river. Beautiful, gradual blend of colors of the woods in spring; in autumn it is far more colorful, though more flashy. Most trees are now vividly green, yellowish green, some brownish green; the redbuds form beautiful patches. Ducks (wood duck) everywhere along the bank. Magnificent forest, dark shady areas inside it; several Indian ranchos made from thin poles bound together. To be sure, the forests here bear some resemblance to Brazilian forests but are by far less beautiful. An island divides the river; to the left of it, there are large sandbars. We severely struck unseen logs in the water several times. Before us we now saw bare prairie hills again. Until that point the shore to the left was marked by forest and, underneath, with a splendid strip of redbuds. After supper and shortly before dusk, we halted to cut wood. Our hunters again found a Heterodon snake. At night a violent thunderstorm with rain. 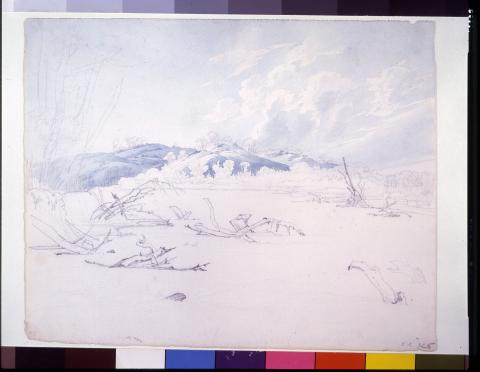