17 September: At three o’clock in the morning we expected the stage, which came from Easton. At four o’clock we took our places, and several other passengers joined us. It was fully daylight when we reached Allentown, where we changed horses and coaches. Here we had to wait a whole half hour and then, shortly beyond this town, crossed Cedar Creek, which was swollen, as all the streams were, and the road was covered by water, since a very severe thunderstorm had moved through this region during the night. At Bethlehem there had been terrible thunder and lightning, but the temperature had remained the same. From Allentown it is 18 miles to Kutztown, 36 miles to Reading. The region is beautifully cultivated, the fields well tilled. There are individual farmsteads everywhere, and very extensive fields of corn as well as of clover and buckwheat. Some of the clover was sown among the grain, just as it is in Germany, and some of the tassels of maize, or Indian corn, had been cut off and the stalks tied up. This kind of grain matures in October.

We stopped very often at post offices, and the horses were given water each time, for which purpose buckets always stood ready. Here the large leather mailbag is always tossed down, and whatever is supposed to be sent on is placed inside. One always sees a large number of persons sitting in front of the houses, their feet on benches; whoever wished to draw conclusions from this would have to think that Americans were idlers. Limestone is the most conspicuous kind of stone in this region; indeed, there are several limekilns along the road. A rather poorly dressed man with an enormous cudgel had joined us and soon began to entertain us with his stories. First he told us about a flying snake that had been caught in Asia. And when I took issue with him, he asked whether I were a Netherlander or a Frenchman, whereupon I asked if he were an Irishman, and the laughter was all on my side. A young man fluent in German conversed with me; several ladies also provided pleasant conversation.

Papilio plexippus flew about the fences, and several flights of birds appeared to be getting ready to join the migration south; they were perched together on dead trees. Near the habitations along the road grew Datura tatula with violet blossoms [and] tall Phytolacca with ripe berries (which the birds eagerly lie in wait for) and dark-red stems and branches. M2In most regions this plant is called poke-plant. When young, that is, not over 6 inches tall and not yet dark green but whitish green, this plant (its leaves) provides an excellent vegetable, and Mr. Say said he would perhaps plant it in his garden for this purpose. On the sumac (Rhus), as well as on several kinds of maple and oak, the leaves are already turning red; autumn is here. We passed several creeks or small brooks, the names of which elude me. Beautiful asters have white and violet blossoms; their flowers are mostly small. Untilled fields are completely overgrown with the yellow blossoms of Solidago or Hypericum, just as most of the Syngenesia are now generally in bloom.

One sees especially beautiful farmsteads in this region of Pennsylvania. The barns, in particular, are massive, made of limestone, [and] very large; they have stalls underneath with eight to twelve doors and windows, and the 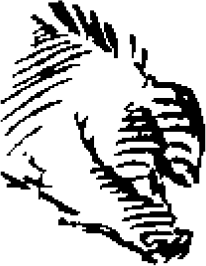 upper story of the barn juts out above them. At the end there is a passageway where the wagons are kept dry. All kinds of livestock move around these barns. One especially sees very heavy, fat pigs with very broad, drooping ears, and most of them are speckled with very many round black spots. Rarely does one see rust-red hogs, but they do occur.[Page 1:96] In this region a number of shingle roofs were painted reddish brown like the windows and doors of the barns. 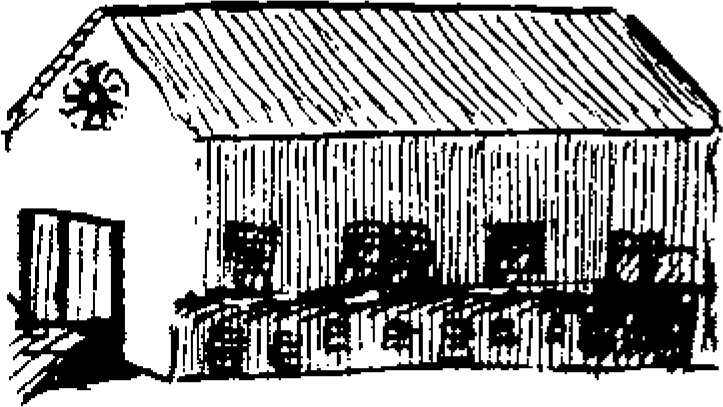 We saw several beautiful woodlands, many rocks, oak and walnut trees, also many hickory (Juglans alba), which provide the best American wood. Next best is the wood of the white oak (Quercus alba). The walnut trees in the forests were laden with fruits that smell somewhat like Juglans regia and also leave black stains. In general this region has the appearance of Germany. It is varied and pleasant, wooded hills along the sides [of the valleys]. Dwellings often appeared large and neat, pastures well tended and of a very fresh green color. The ubiquitous fences, which form zigzag lines, as well as the tall, slender shape of the trees and the structure of the dwellings, differentiate this region from a German landscape.

In Maxatawny Township we watered our horses at an inn. Here, and throughout this region, the inhabitants’ names are German, and this holds true as far as Pittsburgh. An isolated church or meeting house, also an isolated octagonal schoolhouse, as already described. In the distance we saw a beautiful house among tall European poplars and surrounded by sunflowers (Helianthus), which here grow to 8 feet or more in height. We passed Sacony Creek and reached Kutztown, where we had breakfast at nine thirty. The heat was already great, the dust unpleasant; the thunderstorm had not come this far. Half an hour later we traveled on. The cattle grazed under individual trees in the pastures or orchards and sought shade. Along the fences stood rows of heaped grain piles, six to eight or ten of them together.

To the right of us rose the Oley Mountains, beautiful green wooded mountains, which are connected to the Lecha Mountains. They recede in the distance, and before them there is a meadow beautiful valley. Here smoke was rising from burning charcoal. The post office of a certain Bechtel (almost all the names are German) is exactly halfway to Reading. A creek. Beautiful meadows with low brush spread out before the wooded mountains. Here lilac-colored asters grew in such abundance that they formed beautiful borders. In several places the region was extremely rocky, and there we received rough jolts; several fields were literally covered with stones. Beautiful wooded mountains appear left and right. We passed Beartsville and Ebelingstädle.

Toward noon we reached Reading, a rather attractive city of 6,000–7,000 inhabitants situated on the Schuylkill. It has several churches, and at the present time a new one is being constructed. There are about 400 Negroes and colored persons here. In the entire state of Pennsylvania there are 37,930 free Negroes and 403 slaves. Some of the streets in Reading are not paved in the center. Trees and sidewalks made of bricks along the houses; the former include Platanus, basswoods, Gleditsia, poplars, and others. In all these cities, construction goes on apace. Cholera had already carried off several persons here, but most of the residents I spoke with did not want to admit this.

I saw the return of a funeral procession in which at least ten women (ladies) rode on horseback in the procession. They had saddles with a pommel in front, over which they rested one leg while seated very much to the rear, and wore large hats: a comical caravan. The severe thunderstorm, traces of which we noticed along the way, had also struck here at Reading and had killed three pigs in a barn. Because the stage that we wanted to take to Harrisburg had already left two hours ago, I decided to remain here today. One of the ladies who had come with us had given me an orange and a peach, which I imprudently ate and immediately felt abdominal pains. I still felt unwell when I left by stage on the following morning, on 18 September, at eleven thirty.