18 October: In the morning, very warm, [at] six thirty 16°R [68°F, 20°C], wind, overcast sky. A rainbow; soon rain. To the right we see Rockport, Indiana, a small town situated on three undulating rocky hills separated by small defiles. The hills, which drop off precipitously facing the river, are of a whitish hue, are completely overgrown with timber on top, and bear several little houses. From here on, the banks are low, with wooded hills everywhere.

After breakfast at eight thirty, we see on our left Owensboro, or Yellow Banks (town), a village with several imposing houses. The bank is steep, and there is much wood lying on it, some of which we take on board. Many passengers go ashore. An urubu flies above the town. We have observed this bird species approximately since Cincinnati. Half an hour later, departure again. To the left, urubus hover above the forest. Despite its low level, the Ohio is now very broad and beautiful. The timbered banks are already rather low. A large denuded sandbar, on which several islands with brush and woods are located, called French Island. The bushes are surrounded by willows. Wild geese move up the Ohio. Farther down, poles have been driven in to indicate shallows ahead. For the sake of caution, soundings are taken. A steamboat, the Lexington, lay near the bank. Farther downstream one sees flatboats being built in the sparse forest on the right bank. Still farther downstream, people are occupied ramming poles in the river. Several boats and many people, particularly blacks, are busy doing this. Two steamboats bring up materials.

This forenoon at eleven o’clock, a man died of cholera on our ship. Yesterday he was still completely well; during the night he played cards and toward morning began to complain. I saw him at about eight o’clock. Mustard poultices were placed on the back of his neck, on his chest, calves, and abdomen, but he died very quickly. Two hours later a box was ready in which he was taken ashore at a steep spot on the bank.[Page 1:122] His hands and forearms were said to be as black as ink. When the ship lay to, most of the passengers went into the forest located above, and many watched the burial. A hole had been dug at the top of the bank. The box was placed inside it after the dead man’s veins had been opened, out of which, however, the black blood did not flow. The name of the deceased was written on a white board that was set up at the grave.

Everywhere in the forest near the grave, cane (Miegia macrocarpa Nutt.) was growing (very similar to the Brazilian taquara); we took along the long stems with their delicate, plumed leaves. The Indians make arrows and pipestems from it. Mr. Burr Garland filled his Indian pipe, in the shape of a bear, which he had received from the Cherokee, with a stem like this

and smoked it diligently. It was crudely carved from wood in the shape of a bear and had the opening for tobacco on the back. That [kind of] cane does not twine; it forms thickets in the dry forest. Beside it grew the pawpaw tree, and many sturdy grape (Vitis) vines hung from the trees.

Here the forests already have a somewhat different character. Some of the trees were giants; Mr. Bodmer, in particular, found trees of this kind when he went into the forest with the shotgun. The ship’s bell finally summoned back the passengers. Mr. Bodmer and Dreidoppel nearly arrived too late. They brought back a squirrel that they had immediately prepared in the forest, and the body of the animal hung from a stick.

Scarcely a half hour from the above-mentioned place, we reached Evansville on the right bank, [and] then before long, Pigeon Creek. But before these we passed Green River on the other bank, and after one or one-and-a-half hours, the market town, or village, [of] Henderson on the left, or Kentucky, side. Apparently coal is mined along the bank in this region, as we noted somewhat earlier. At Henderson a great store of provisions was taken on, and many passengers went ashore. There they saw more than a thousand young chickens, which had been brought in large crates for sale. We bought as many as we needed for a dollar a dozen. The sunset here in this place was splendid. The wide river was as smooth as a mirror, the thickets magnificently reflected in it, and the sky, completely clear, ranged from the most splendid lilac to fiery yellow. At dusk we continued and toward midnight came to land at Mount Vernon, where we disembarked. The night was very dark and so warm that one perspired at the slightest movement. We went into the townM31600 inhabitants. located on top of the bank and knocked for a long time on the door of the inn, where we finally succeeded in bringing a black to the door. Finally the landlord’s son, a pleasant young man, also woke up, and we obtained some very dirty beds, on which I we slept mostly clothed. 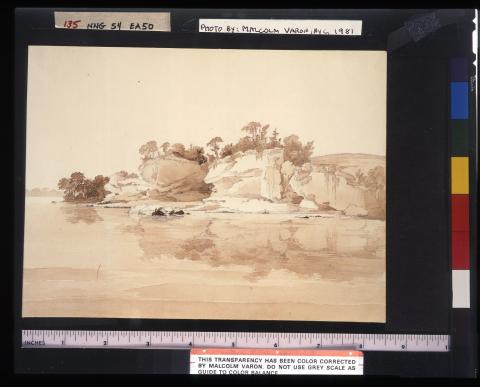 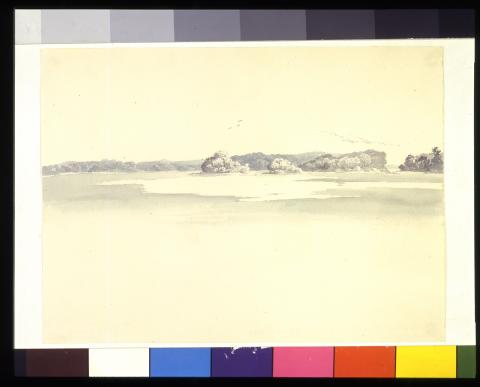