15 October: In the morning after breakfast, Mr. Wenzel and I drove to the racetrack (horse race) in a gig. Mr. Bodmer rode with a German from Hamburg who has horses for hire. This place is built about a good half hour from the city, along tall oak trees without underbrush. A company was formed, bought the place, is now having it equipped, and then from time to time will hold horse races. The first of these is supposed to last all next week. The place is a mile in circumference and is enclosed by tall planks; in the center [there] is a building open above and on the sides for the stockholders, or entrepreneurs, of the company and their families. Several other isolated buildings are for the spectators—one for ladies, another for gentlemen, and another for the judges.

Outside, along the track, are three or four stables where the racehorses were kept. For the most part, the horses were not big, partly Arabian, so it seemed, but not outstandingly beautiful, several ugly, their feet and croups good, all with long tails. They were fed with oats but [also] with dried corn leaves instead of hay. Negro boys took care of them. These horses belong to outside owners who come here; for each horse that is supposed to run, one must pay according to the number of races it runs. Even though these races are not comparable with the great English races (incidentally, everything is arranged in the English manner), they do provide a source of entertainment for Louisville, even though it would certainly be better under [the] present circumstances to postpone them.

In the afternoon we went to Portland, the place of embarkation one-half hour from Louisville where numerous steamboats lay in readiness. The road there leads through a bare, level region, not far from the river, which forms cascades about 4 feet high next to Louisville, which can be passed only when the water is high. One therefore embarks downstream from them. Near Portland there is an island in the Ohio. In the branch on this side were steamboats large and small: the Tally-ho, Charles, Charlestown, Argus, Yellow Stone, Saratoga, Caledonia, Orleans, Banner, Atlantic, Hibernia, and still others. The Water Witch was the one we boarded.[Page 1:120] Since the steamboat could not reach shore, we drove into the water in our carriage to reach the ship, as did the baggage carts hitched to two horses in tandem. The onrush of passengers, carriages, and freight wagons was very great. One had to keep a watchful eye on the baggage.

The captain, Fleischmann, was a very sensible, prudent man of German descent whose ancestors came from Coburg. He no longer spoke much German, yet he still spoke it somewhat and understood it well. His ship had good, careful engineers (this is what the people are called who maintain and have charge of the steam engines). The Water Witch was a nice ship of medium size with two decks. On the lower one, the engines and many deck passengers; on the upper one forward, the place where the barkeeper sells his drinks. Behind it, two rooms for cargo and various rooms for the stewards and the offices of the steamboat officers. Then the large cabin with twenty-four beds and long mess tables; [these tables] are taken away at night, and beds are made on the floor for other passengers. Behind this cabin are located two others for the ladies, where the captain’s family also lives.

We were in a pleasant and charming region: on the bank, the village Portland; opposite, on the other side of the wide river, the city New Albany with very regular streets. Since the Water Witch had to take on too large a cargo, it remained at anchor today, and many passengers again went ashore in order to sleep there. It was demanded of those of us who wished to travel only as far as Mount Vernon that we surrender our beds to those passengers who had booked passage for the entire voyage (the ship was bound for New Orleans). Mr. Bodmer protested, and we kept our beds. The evening was very warm and pleasant, the heat in our cabin very great. 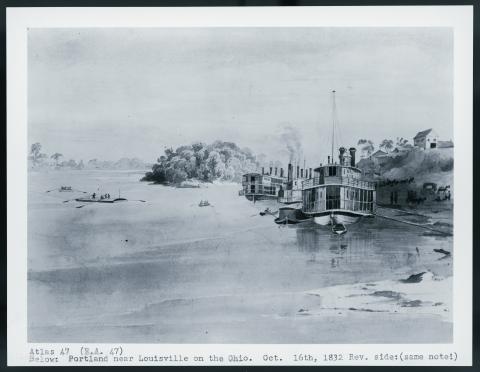