13 October: At six thirty, 13 1/3°R [62°F, 16.7°C]. During the night we passed the following towns: Adamsville, Manchester, Aberdeen, [and] Ripley; and the streams Brush Creek, Eagle Creek, Straight Creek, [and] White Oak Creek. [We were presently] at Neville (a hamlet). To the left we passed the towns Vanceburg, Maysville, Augusta. The steamship Helenmar lies at anchor alongside us in order to take on wood. The river makes a bend. To the left, a fringe of young bushy Platanus along the bank, then forest on both banks. To the right, Moscow, a small, scattered village; soon afterward the market town Point Pleasant. While we were sitting at the breakfast table, the ship again forcefully struck the bottom. Then New Richmond to the right. The river is wide. Unfortunately, it is raining; we do not see the region so well.

A tall, lean man, General Taylor, joined us and told us much about his extensive properties opposite Cincinnati. He spoke at extraordinary length, spat all the time like a sprinkling can, and was very insistent that we should visit him; he is said to invite all Germans. Here the river is wide and beautiful. One promontory after another emerges, behind which there are wooded mountains. Everything is overgrown with forest. Tall timber or cultivated fields everywhere. A steamship follows us closely. To the right there are mountains almost completely cleared of forest; here and there, still timber. Wooden fences run along them up the hills. Sheep graze on them. The water becomes very shallow. Here one sees mussels (Unio) on the bottom. The ship strikes bottom. A duck, which was sitting on a stump or tree in the water, let us get close. Forest on both banks, here and there transformed into cultivated fields. On the right bank, several cultivated areas. Then comes the Little Miami River, 6 miles from Cincinnati. It was almost dry.

After scarcely a quarter of an hour come ColumbiaM25Columbia (village). and Miami (town) on the Ohio bank. To the right the valley is wide; the mountains recede but again approach the river. The steamship Arkansa hurries past. After another half hour, we reach the beginning of the city of Cincinnati, named Cincinnati Bar. Intermittent rows of white, mostly attractive houses along the river. Nice, individual farmsteads with weeping willows, gardens, fruit trees, wood supplies, and various other things. Here there are several factories, workshops, and stores—much life and activity.

The city is growing and is crowded together; broad streets open toward the river. The pavement extends to the shore; a broad square is paved there. Ox-drawn carts move into the river to the boats. Ironworks, breweries on the bank, warehouses. A steam engine, which drives the waterworks that supplies the entire city.M26I very much regretted being unable to see the various sights of Cincinnati: for example, the museum of Mr. Dorfeuille, in which there are said to be very interesting natural history objects. It is really unfortunate that all these American museums, like European amusement halls, are obliged to acquire additional, often ridiculous and trivial, objects. Here, for example, one sees a depiction of hell. The Yankees from the country would not come for a visit unless such objects provided some income for the owner.

Because cholera was so prevalent in Cincinnati, we did not stay there but immediately boarded the Portsmouth, which departed at once. 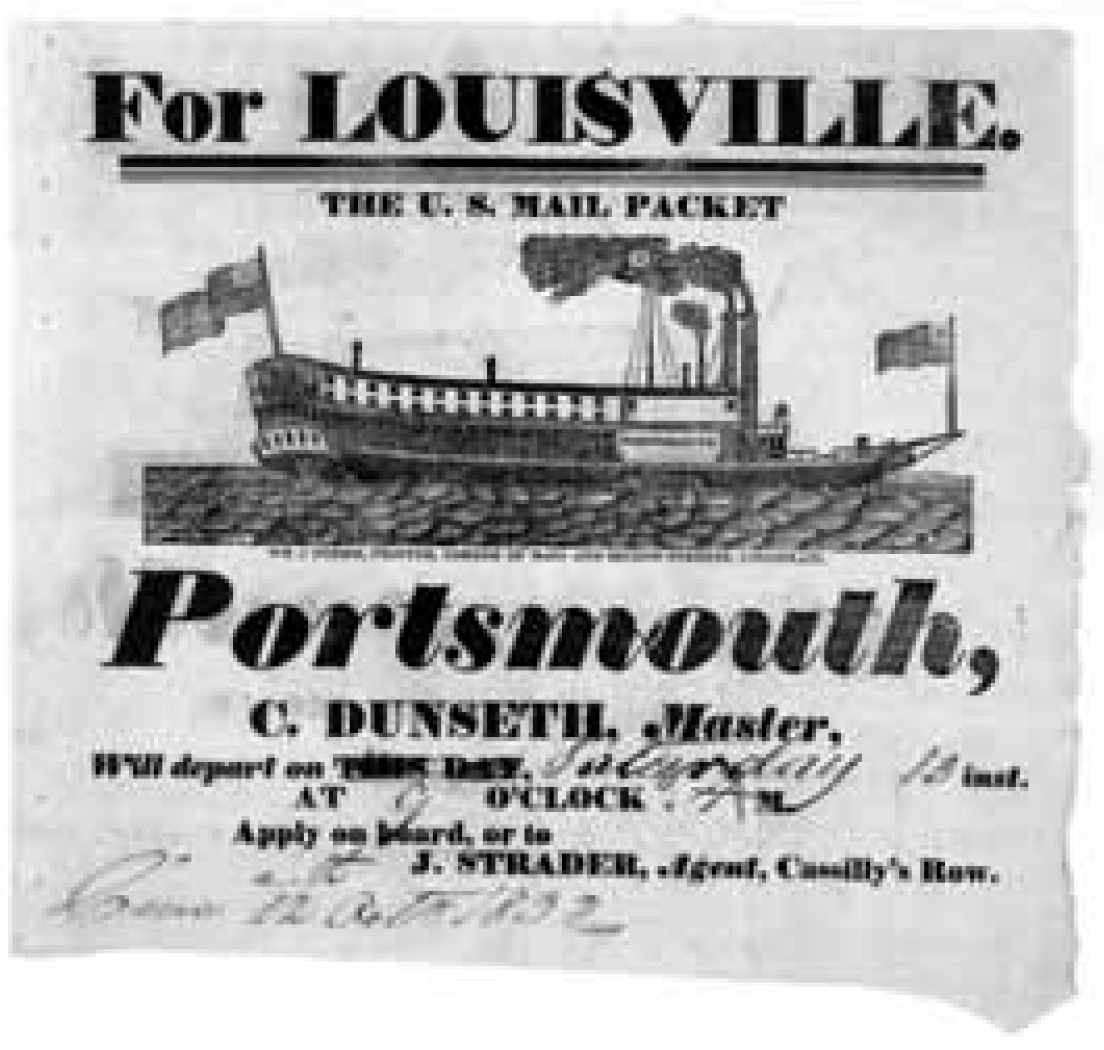 At the end of the rather imposing city lay the steamboats Cincinnati and Samson. Opposite the city are located the towns of Newport and Covington,M27The Licking River issues between them. productive towns with steam engines and other factories.M28In David Thomas' work, the valley of the Ohio near Cincinnati is referred to as deep. Only a native can say this, since North America has no high mountains.

Pretty country home with Babylonian willows behind Cincinnati. Soon the forest, with its variegated colors, again appears on both banks. After lunch we reach [the] Big Miami River, which marks the boundary between KentOhio and Indiana. Lightly wooded banks on which there are cultivated fields or forest. Before the mountains along the Miami, there is a flat, low-lying piece of land that projects out into the river. Immediately opposite it there is forest in the state of Indiana. Soon one reaches Lawrenceburg, a market town 22 miles from Cincinnati. An attractive market town. We met the steamboat Parsons, with soldiers coming from St. Louis.

Bank steep and bare, 30 feet high, covered on top with Platanus and other trees; cultivated fields behind it. A creek not far away. We reach Aurora, a village with attractive houses. Here Hogan Creek emerges. Behind the town, wooded hills, then partly bare country. On the right bank, 38 miles from Cincinnati, we reached the village Rising Sun with several attractive dwellings.M29D. Thomas found here about 40 to 50 houses in 1819; now there are about [----]. Then forest on both sides. Cultivated fields here and there. Night soon set in. A large fire was burning in our cabin and gave off too much heat. One or more steamships sailed past us. At night they present a beautiful appearance.