31 August: Early in the morning, overcast sky, comfortably warm. Some rain at seven o’ clock. At 7:30, 74°F [23.3°C]. The Indian camp looked very picturesque today. It stood about 300 paces from the fort, and the [tipis] were close together, in case of an enemy attack. They had learned that the Assiniboines, [who] had divided into rather small bands, still remained in the vicinity of the river. We learned that yesterday’s rockets had made no significant impression on the Indians; undoubtedly they had already seen the same thing up north at the Hudson’s Bay Company. Early Mr. Bodmer sketched an Indian in a beautifully painted elk hide with every conceivable heroic deed on it: a Piegan, his name is unknown to me. He was completely wrapped in the hide and wore his rifle sheath wound around his head. White Buffalo, with his head wound, had come into the fort last evening with his wives and children and asked for night lodging. The stench from the dead—recently fallen women and children hurriedly buried just below the surface in a woodcutting trench—was so intolerable that he could not sleep in his [tipi]. Mr. Mitchell had granted his request; the following morning he left again early.

About eight o’ clock it rained more heavily. The sky looked as though it was about to clear up, but at nine o’ clock, when the cannon was fired as a signal for the Indians, it began raining heavily, and the rain continued. About twenty-four chiefs and most preeminent warriors of the Piegans, including one of the Blackfoot, came walking with slow steps from the camp; this time all the other men stayed behind. Women and children in large numbers had assembled as spectators around the fort. Mr. Mitchell went to meet the chiefs. At this moment on the hills beyond the Missouri one caught sight of the band of Blood Indians (who had been in the neighborhood) making their appearance along the edge. They had their [tipis] and travois with them and wanted to camp near the fort. But now NínochKiä́iu appeared and declared that if one let these Indians come, he would be inclined to shoot at them when sober, and all the more so when all the Indians were drunk. They were told not to come over, and they [then] moved somewhat to the right, toward the prairie.

The Piegan chiefs were very nicely attired [indeed,] many looked especially fine), but the violent rain drove them one by one into the fort, and because they were not all known, they were not all fittingly saluted with cannon shots; nevertheless, the cannon was fired four or five times. The chiefs who entered were [1.] the principal chief, le Boeuf du Milieu, Tátsicki-Stomíck; 2. la Langue de Biche, Penukáh-Zenínn; 3. le Petit Garçon, Sachkómapöh; 4. l’ Ours Caïe, Kitsipooch-Kiä́iu; 5. l’ Enfant [— —]; 6. le Couteau d’ Ours, Kiä́iu-Stománn; 7. le Cheffre des Ours, Nínoch-Kiä́iu, who did not enter, however, but walked around poorly attired; 8. la Jambe-Roide, Haiesikate, like the previous one; 9. le BoeufRouge, Míkutséh-Stomíck; 10. la Corne de Vache Basse, Ihkas-Kinne; 11. la Belle Femme, Achsapácke;M45Achsapáke (‘Ach’ velar, ‘e’ fully articulated).and the Blackfoot (Siksika) chief la Corne de Vache Basse, Ihkas-kinne.

They did not walk according to rank, entered in twos and threes, and had to be led into the mess hall, where they occupied the last space. Here they smoked and drank whiskey. Among them were handsome, expressive men. Their faces were painted red or with bluish metallic ore. They had very nice leather shirts, some decorated with many strands of hair and ermine.[Page 2:251] Their often-very-beautiful shoes were soaked from the rain and dirty. In short, the moment was very unfavorable for such a public appearance.

Several chiefs—among others, old Middle Bull in his especially handsome apparel—were in Mr. Mitchell’s room. Middle Bull spoke for a long time and said that it must not be believed [that] they were taking their furs north. It would be in their best interest to remain on good terms with the fort here, for the other one is much too far away for them. Thus one should no longer have an evil heart toward them and just believe that, if some talked about going to Hudson's Bay Company, these were merely attempts to obtain cheaper goods.

The old Middle Bull looked honorable. His face was thoughtful and serious. He had a gently bent nose and was not large. He was also stocky. His leather shirt was the most beautiful of all. It was embroidered on the arms with blue flowers. On the right arm, it had long fringes of ermine fur rolled together, decorated with little red feathers; on the left arm it had long black strands of hair. The leather of the shirt was new and yellowish white. Over his shoulders he wore a cape of otter fur and in front, on each end of it, a thick tassel of ermine strips.

All the chiefs demanded whiskey, and each was to have a keg. But there were not enough containers, and some of them were given whiskey in open kettles, tin pots, and the like. They were seldom satisfied, and all of them wanted more. Some felt offended and left. One could not satisfy all of them, but as a gift Mr. Mitchell distributed more than two barrels ([— —] gallons) before trading began.

At twelve o’ clock, 75°F [23.9°C]; heavy rain. About noon, [they] tried to get the chiefs out gradually. Only la Langue de Biche was still here when a quarrel broke out at the gate. An Indian struck a gatekeeper. He defended himself, and a violent scuffle broke out. A knife was drawn. Fortunately, la Langue de Biche and another Indian restored order as they pushed the monster out through the gate. We had hardly eaten lunch when, at the gate, singing, screaming, and scuffling betrayed the effects of the whiskey on the Indians. Soon shots were fired near the fort, and the Piegans shot at the Blood Indians, who responded with several shots. Mr. Mitchell placed strong armed guards at the gate. The Blood Indians lay on the tall bank opposite the fort, where one could see only their heads. From there they could shoot into the fort.

The rain had subsided, but the sky was dark and gloomy and the ground wet. We were trapped inside like prisoners, the gates under close watch. Outside, in front of [the gates], a loud uproar and a raging horde. Between the two gates the Indians were allowed passage through an adjoining room up to the room where trading was carried on, and here there was a continual pushing, exchange of words, and fighting. Great patience is required to be in charge of such a post. In general one seldom sees vicious cases of intoxication among the Indians; for the most part, they become maudlin when drunk. If a container of whiskey was brought to them, they immediately stuck their hands into it and tasted it. Some put their mouths right on it, drank, and also got some into their noses, no matter to whom the whiskey belonged.

Toward evening the Blood Indians withdrew; they camped somewhat farther away. Until now the trading had proceeded rather quietly. The Indians all exchanged their beaver for whiskey. Several good Indians faithfully supported the men at the gate and averted many quarrels. Nevertheless, a powerful, raging fellow broke into the fort [and] hit the men with his fists, and only after great effort did they finally succeed in throwing him out. At nightfall the horses returned; we had feared that they had been taken by the Assiniboines. By about eight o’ clock this evening, it had become rather quiet. The noise had abated. Probably most of the Indians were drunk. At midnight it was completely quiet. Night beautiful and moonlit. 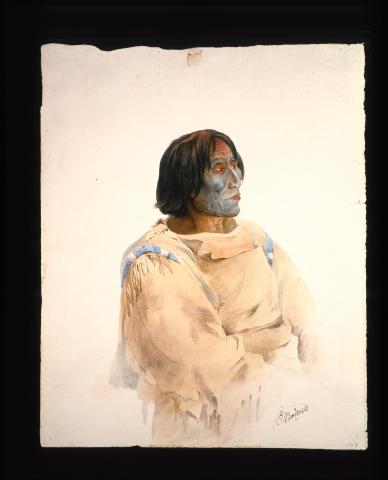 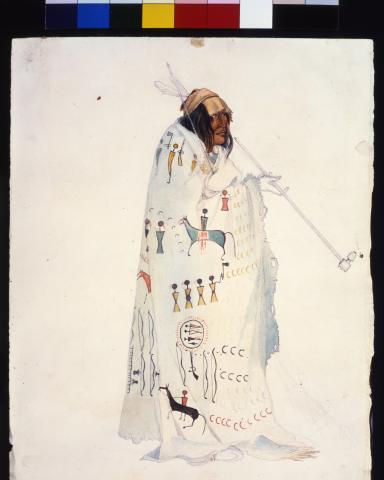