8 September: In the morning, clear, pleasant weather, somewhat cool. At eight o’ clock, 64°F [17.8°C]. The fort filled up early with Gros Ventres, especially women and children. A band with about twenty-four horses arrived first, mostly packhorses, on which they brought meat or other articles for exchange.[Page 2:60] They had several very good horses and a large number of wolf-dogs, some of them beautiful. At ten o’ clock the lodges however, were not yet here, and it is possible [that] they will not come near the fort at all, because there is nothing here for the horses to graze on. These Indians were badly prepared for trading. They had almost nothing other than some pieces of clothing to trade, not even meat; and now our stock was also nearing an end. As the Gros Ventres stated, there were buffalo only a great distance away. Soon we will not even have any more dry jerky. At noon, 68°F [20°C].

In the afternoon Mr. Bodmer went to the hills to draw Bears Paw Mountain; Dreidoppel went along as his escort. The Gros Ventre camp still stood on the bank on the other side of the Missouri, about a mile from the fort. From there they wanted to move to the Teton River or the Marayon [Marias]. Although the Indians had nothing to sell, they nevertheless remained all day, like flies. Indeed, one had to keep his door shut if he did not want to be overwhelmed by visitors who could not be sent on their way again. Before the Indians went away toward evening in twos, threes, or fours, almost all of them, women and men, begged once more for some tobacco, sugar (which they like very much), or the like. At six o’ clock the hunters returned. They had killed two bison bulls and a deer but had not brought back the buffalo meat, since they got it while riding out. At 6:30 dusk arrived; the evening was cool. 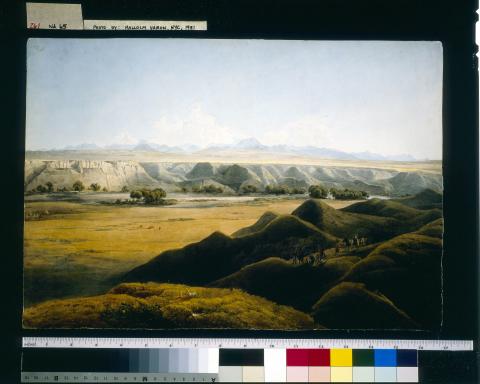 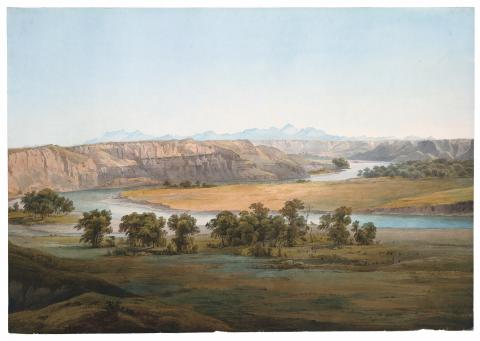