3 September: Early in the morning, somewhat cool, windy. The Blood Indians shouted across the river that many Blackfoot were now approaching. Kutonä́pi and a large group of Indians were already in the fort early, [as was] Nínoch NínochKiä́iu, [who] again demanded whiskey. At 7:30, 65°F [18.3°C]. At 8:30 we heard shooting, and a Siksika war party of twenty to thirty men advanced. Several of the principal warriors were allowed into the fort. One of them was a strong, well-built Indian; his forehead and the area around his eyes, as well as his mouth and lower jaw, [were] painted vermilion. In his hand he carried a medicine flag shaped like a cardinal's crosier.M46The Indian who carried this flag said it was the medicine
that brought back together again the various separated Indians of
a war party on the prairie going their different ways. It is the sign
of the society of the Chiens des Prairie.

The men wore blanket coats, but their leggins were very beautifully decorated with human hair and multicolored horsehair. They told us that there were two powerful Blackfoot (Siksika) war parties on the move; the largest part of this nation was still up north. Ihkas Ihkaskinne came to us, and Mr. Bodmer worked on his picture. I bought a Piegan shirt decorated with hair and a beautiful cap with horns and strands of ermine from the Crows. An Indian presented Mr. Mitchell with a fine leather shirt. Several offered horses for sale. The fort was full of Indians—Piegans and Siksikas — and in the evening, a chief of the Blood Indians, who is regarded as a good Indian, also arrived.

At 5:30 [we] heard shooting and, on the hills behind the fort, saw a powerful war party of the Blackfoot advancing. They fired and then halted. After some time they moved down near the fort. There were 250 of them. Their leader came into the fort, but they were turned away and not allowed in, because they had nothing to trade. The Blackfoot (Siksikas) and the Blood Indians catch few beaver and prepare few robes, because their scouting parties are always at war, and [they] sell primarily meat to the Hudson’s Bay Company. Of the three tribes, the Piegans catch the most beaver. Often they are lent beaver traps, which are a kind of iron trap. In the afternoon Mr. Bodmer had drawn a Piegan medicine man and warrior.

[At] about 6:30 the Indians had to leave the fort; only the chief of the Blood Indians stayed here. During the afternoon it had rained heavily, and the wind had been blowing. The evening was cool. Mr. Bodmer had guard duty from nine to eleven o’ clock; Dreidoppel, toward morning, which is the most dangerous time for an Indian attack. The officers were Mr. Mitchell, Culbertson, Bodmer, Dreidoppel, Berger, and Harvey; my turn will come, too. Three of the men were always on guard duty and were relieved three times, hence nine men every night.

Today I wanted to have a chest made, but there was not even a splinter of wood available. The woodcutters cannot work as long as so many Indians are swarming around the fort. Moreover, the slain Piegan women and children who had been buried in the [wood] cutting pit spread such a strong odor that White Buffalo and his family spent the nights inside the fort, since his [tipi] stood near the pit. Mr. Bodmer, who had guard duty from nine to eleven o’ clock, saw an Indian creeping up in faint moonlight, probably to steal; but the Indian saw him and left twice. Dreidoppel had guard duty from two [o’ clock] until daybreak.[Page 2:255] At one o’ clock in the morning, an Indian came to the fort and talked loudly for hours. Berger was there several times and determined that he was drunk and wanted to force his way in. 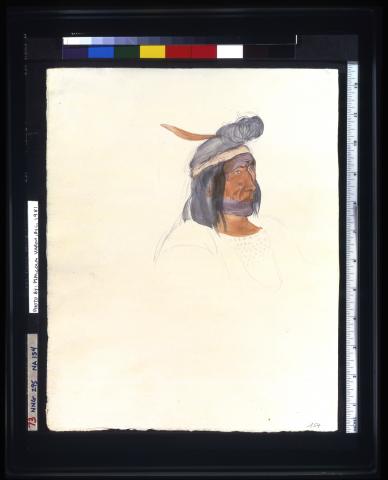 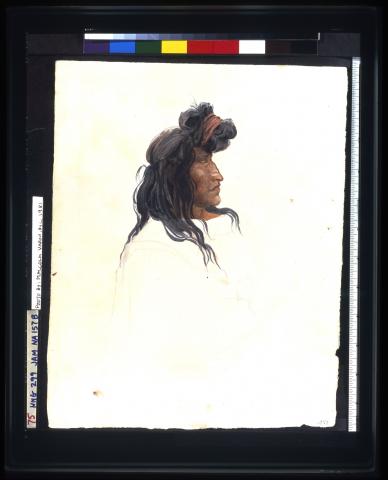