29 August: Hot sun already early in the morning; at 7:30, 80°F [26.7°C]. Very early, Piegans assailed us in our room. They had all slept in the open courtyard without blankets and had received nothing to eat; thus, [they] were sleepy and exhausted. The Assiniboines had divided into three groups and withdrawn toward the Bears Paw Mountain; [they] left behind a dead man, whose leather blanket and leggins had been removed and which a Piegan was wearing. The latter had pursued the enemy on their flank and fired on them, but they had no longer responded; probably they were out of ammunition. They had taken several severely wounded and dead with them. Today we will learn more about the number of fatalities.

The fort was filled with Indians until eight o’ clock. The principal chiefs [were] here during the night: Boeuf du Milieu [Middle Bull], the old Kootenai, and la Langue de Biche. A chief of the Blackfoot (Siksikas) with the name la Corne Basse, Ihkas-kinne,M43‘e’ half [=ə] articulated. was drawn by Mr. Bodmer today. He was a big, strong man with a deep voice. Most Piegans now left and said that today or tomorrow they would set up camp at the fort to begin trading. A Piegan who had been present at the peace treaty with the Crows presented me with a magnificent Crow feather bonnet, which I sketched. I also received his beautiful shoes. The old principal chief of the Piegans, Middle Bull, promised to let himself be drawn as soon as he made his ceremonial entry. A child who was wounded yesterday died today. At twelve o’ clock, 85°F [29.4°C].

Today I visited the severely wounded Natáh-Otann and found him with his face distorted. He seems to be wounded in the lung, because he complains of shortness of breath. A dangerously ill child lay beside him. Yellow Buffalo, with all [the] other Piegan [tipis], had [moved] away [from the fort]. They had gone into the wooded region somewhat higher upstream along the river where the horses, which would die of hunger here, will find forage. Now there were only about four or five [tipis] still standing beside the fort. As usual for the afternoon, a warm, dry wind had risen again today, which blew dust into the air. Summer is exceptionally dry in this country, rain very infrequent. Between two and three o’ clock, dark clouds covered the sun. Today, incidentally, was the warmest day we had yet had this summer.

Concerning the aforementioned Ihkas-kinne, Mr. Mitchell told me that at one point in time, all the fort’s horses had been stolen, undoubtedly by Blackfoot or Blood Indians. This man set to work, sought the [horses] out, and brought them all back except one. At that time he wore an outfit that was all covered with mirrors and pieces of mirror glass. Now, instead of the mirrors on his war attire, which on the naked upper body consists only of several strips of otter skin stitched together, he has fastened numerous bits of mother-of-pearl (nacre) from mussels. He is a big, strong man with a bony face [and] prominent features.

A goodly number of Blackfoot (Siksikas) had been present at the battle yesterday. The Indians had probably learned [what] was being said about them not wanting to attack. Therefore they told Mr. Mitchell their horses had been too tired, because they had already had to ride too far from their camp to the battle. This excuse is, in part, justified; they had to ride far in the heat. But why did they not dismount and fight on foot? After all, the Assiniboines were mostly on foot. One heard the latter calling out to one another to advance and attack; and in twenties and thirties they did advance, something that the Blackfoot did not dare do.

This afternoon Bird left in great anger, because Mr. Mitchell did not want to sell him a certain horse. He makes his pernicious influence felt everywhere. An Indian told Mr. Mitchell in confidence that Bird had sent all the chiefs gifts of tobacco and strongly urged them not to sell their beaver at the fort here but to the English instead.[Page 2:248] Mr. Mitchell gave him a long lecture and [asked] him if they [understood] that up north they would receive much worse prices, that they would go a long way for nothing. The Americans had sincere intentions; the Indians had seen that they did not even shun fighting beside them against the enemy. They should have confidence and consider that he certainly would not stay in this fort with his men if they sold even part of their furs up north. He would break off trading with them entirely, and then they would have to travel the long road to the north only to get bad prices; for if no competition was to be expected from the Americans, the English naturally would pay them even worse. Hereupon the chief responded [that] this was all well founded, and recently after the battle they had all agreed among themselves, when they saw the whites fighting beside them, that they would not go north and wanted to sell us all their beaver pelts here. Before he had become offended, Bird had told Mr. Mitchell, “The Indians had agreed among themselves to sell only some of their beaver here in the fort in order to obtain some whiskey. The principal portion they wanted to sell up north to the traders of Hudson therefore HudsonBay. Therefore [Mr. Mitchell] should not give them whiskey, [Bird argued]. They would tell him they wanted to bring all their beaver, but all this was not true. Finally, he advised [Mr. Mitchell] not to pay as much for the beaver as he normally did, etc. Mr. Mitchell easily saw through this man’s web of lies. Nobody trusts him or listens to his advice. He is a very bad, deceitful man devoted to the English.

The severe, dusty wind continued until dusk. Then the weather became very beautiful and pleasant, and the night was warm. 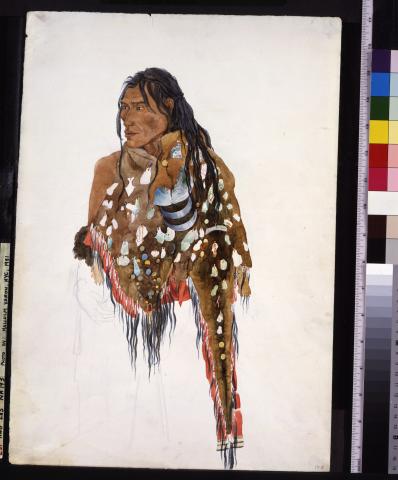