26 August: Early in the morning, pleasant with slightly overcast sky; later warm but with a light breeze. Doucette and Isidor Sandoval rode out early today to fetch the old Kootenai from the big band of the Piegans in order then to be able to depart. Papin and Loretto rode out to shoot elk. At eight o’ clock, 73°F [22.8°C].M37At 7:30, 73°F [22.8°C]. Today old man Berger listed for me the sources of the Marayon [Marias], on which he has traveled several times. They are approximately the following [see fig. 12.15] (more on this matter on [manuscript] p. 217 [note M88]).

An Indian who had very often annoyed us came carrying in his hand a staff about two feet long, painted red and black [and] about twice as thick as a ramrod, which had an opening underneath and on the other end a bundle of black, closely cropped feathers decorated with little bells.[Page 2:242] I asked what this meant and in reply was told that this instrument was necessary to light the pipe. He was “afraid of iron, ” he said, and for this reason lit his pipe with a long stick. This, too, is medicine, and the owner did not want to sell the interesting item. Mr. Bodmer made a sketch of it.

Marceau, our table attendant—whose wife (she is a Shoshone Indian) was confined to bed during the night—had become very warm [and] probably [had been] chilled earlier, for he had had diarrhea for the [past] twenty-four hours. This morning after breakfast, he went straight out of the hot kitchen to bathe in the river. He suffered intense abdominal pains [and] cramps in his hands and feet, in short, an attack quite similar to cholera. He was given peppermint tea, put [in a] warm [bed], and massaged; soon he was better. From the young woman who was recently sketched, I purchased a Kutenai or Kootnehä [Kootenai] basket, lined on the inside with pitch, in which one can carry water. 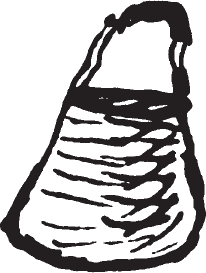 It is woven and consists of transverse rings. At twelve noon, 78°F [25.6°C]. Now [the day] was very hot. Marceau’s wife (the Shoshone Indian), after childbirth yesterday, was already moving about again at noon. The engagés tied up a big fine dog in the courtyard of the fort and shot it in order to eat it. They singed it in the fire. It was very fat. Mr. Mitchell had given it to them. The large Numenius longirostris of the prairies was brought to me. The younger birds have much shorter beaks than the older ones.

A jovial old Indian visited us several times, always [with] some request. Today he offered a wench but first sent away his grown son. He is the same one who asserts that he is a great medicine man. He related that death had called upon a woman in a [tipi], and he had driven him off. The Grim Reaper entered the [tipi] from above, and he saw him coming. [Death] touched the woman but he, the medicine man, immediately applied the medicine to the spot and sat and watched the woman all night. Death came again, but he did the same thing for the second time and foiled the suitor. The same old Indian came to me when he saw me writing and asked me to write a note for the storekeeper so he could receive bullets and powder. They always want presents and beg continually.

Toward evening Bird and a big, handsome Piegan arrived. His name was la Corne Rouge,M38Mikotsótskina. Formerly he was called le cheffre
des Corbeaux; in Piegan, Mastoénna (‘o’ and ‘é’ separate, ‘en’
stressed). This man is an outstanding warrior in the Indian
manner but is said to have shot more whites to death than
anyone else. one of this tribe’ s main warriors. He is the principal leader of the war parties [and] has already counted many coups. During the last battle with the Salish, a horse was shot out from under him, and he sprang onto another one. He shot and killed a Piegan who had wounded his brother, whom he saw falling and thought was dead. He took flight, but the others considered him blameless, and the matter had no further bloody consequences. His costume was very fine: elegantly decorated, with braids of hair everywhere. On his chest [were] horizontal colored strips of cloth with shiny buttons and glass beads, among them a horizontal row of bear claws. He was big, lively, [and] well built, [with] a friendly, good-natured expression. He brought two white horses along and rode on a beautiful panther [skin] cover underlaid [lined] with a wide red cloth.

The evening was very calm and pleasant, the moon nearly full. The hunters were shooting on the other side of the river.[Page 2:243] They were Papin and Loretto, who had shot an antelope and a deer. For days we had had nothing to eat but old, hard, dried buffalo meat and at noon Indian corn. Today an Indian sold [us] a beaver, the meat of which [we] ate this evening. It is tender and soft, though somewhat tasteless—not bad to eat. Some of the Indians were suffering hunger. Mr. Mitchell gave them a large portion of the bad dried meat, which they (that is, the women and children) contended for and eagerly received. The Indians who arrived today said that the big band, about two hundred [tipis], would arrive here at the fort the day after tomorrow at the latest. 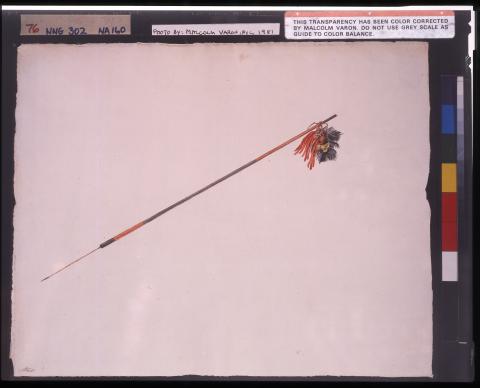