22 August: Early in the morning, bright, beautiful, clear weather. At 7:30, 70°F [21.1°C]. Bear Chief is ill; instead, an old man whose portrait was begun yesterday was drawn. His name is [Pioch-Kiä́iu]. Both Spanish hunters went out hunting. Biche Caïe’s brother came to us; he had an arrow wound in his shoulder from the last skirmish with the Salish and another one beside his chin, where the arrow, so it seemed, had penetrated below the jaw bone and had come out above it under the corner of his mouth.

Bird was already in the fort early; without question, I regard him to be a spy for the Hudson’s Bay Company, meant to draw the Indians away from us and up north. In a few days he will travel to the falls of the Missouri and from there farther on, and he wants to take us along, in which case there can be no danger at all; in any case, we must have a good Indian to accompany us. The Indians brought a girl into our room who had an almost Grecian, very pretty face. This morning the heat was greater than it has ever been before. A chief sent word that they had killed twenty-eight buffalo; Mr. Mitchell should send all his packhorses [and] receive as much meat as he wanted. Unfortunately, the horses had all been put out to pasture, and there were no more to be had.

Bird told me about the mountains to the left of the sources of the Marias River, which are very high and have snow and ice in August. They are at least 150 miles away from the mouth of the river. The valley woodlands are inhabited by the orignal [moose] (Cervus alces amer.) and the gray deer of the English, about as large as the black-tailed deer, with strikingly thick hooves like a buffalo. One can comfortably ride there in ten to twelve days. The orignal lives among spruces and in cottonwood forests. These mountains are a part of that great watershed.

He promised again today to send me his Ojibwe. That nation no longer dresses in Indian fashion but entirely with European materials, except for their leather leggins, which are very short and not fastened in the belt. They let their hair hang down. There is much information about this nation in recent studies; Tanner provides very many expressions from their language. Now they are still numerous and extend over a large stretch of land. Their territory is beyond the Red River [of the North], in a gradual curve from Lake Winnipeg to Lake Superior, and their war parties roam down as far as the St. Peter’s [Minnesota] River. They are enemies of the Dacotas, as can be seen from several places in this journal (vol. 2); [that] is well known. The area between the indicated boundary and the Mississippi and St. Peter’s River is traversed by various war parties, and the Ojibwes also roam there. Generally, on maps [showing] the actual territories of the Indians, one must always allow free areas [in between,] where they do not live but which they traverse from both sides.[Page 2:237] Their language has always been written in English orthography; here I want to write down a few words as I heard them and according to an Indian’s pronunciation. Additional words are in the larger list.

Kihsis (the teeth closed and touched with the tongue) Tibichki-Kihsis (‘bich’ not velar, as in German) Anank Kisäh-mannitto (first ‘i’ short)

Ichkuá (‘Ich’ as in German; this is where “squaw” came from) Kuiuisän (short, together, second ‘ui’ somewhat separate, ‘n’ as in

At one o’ clock, 78°F [25.6°C] in the cool room. We spoke about the lead mines at the Fever River on the upper Mississippi, where Mr. Mitchell had had some digging done in 1824. Chandler provided a good map of the mining district. It is 120 miles by land from the Rock River to the Fox River; 6 miles from the mouth of the Fever River to Galena. The claims of the Winnebagoes were undoubtedly better founded than those of the Meskwakis, who actually lived beyond the Mississippi and also claimed a tract of land on this [eastern] side of the Mississippi. For this reason the former went to war. Dubuque was the first to begin significant diggings on the right bank of the Mississippi; they are named 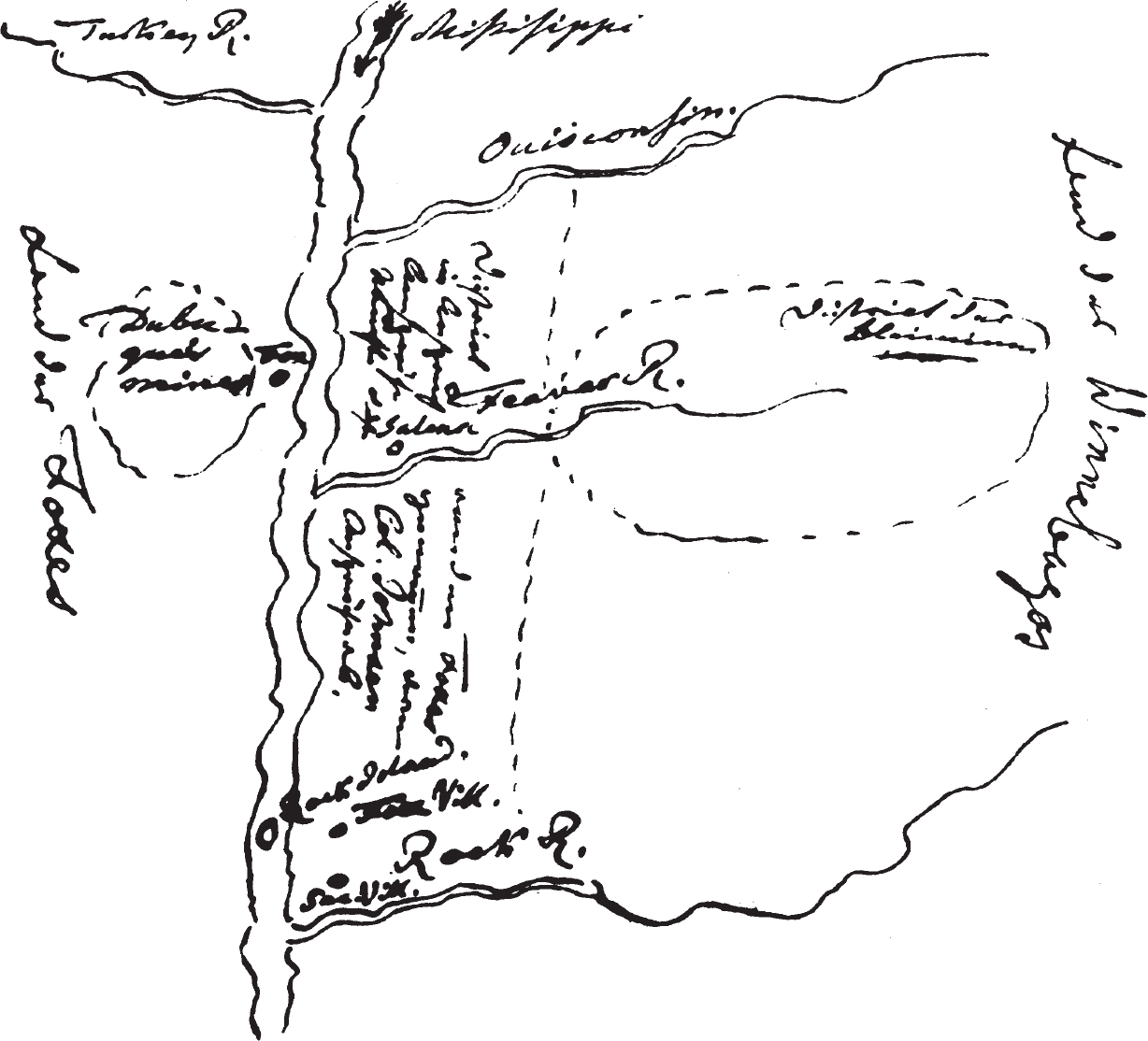 after him.[Page 238] There the lead occurs in veins in the crevices of the limestone. They run either from north to south or from east to west but never diagonally. About 10 miles from the mouth of the Fever River, the mines begin on both sides and above its sources. The veins that run from north to south contain the ore in coarse form. Those from west to east contain pockets of it in clay. The Indians, particularly the Meskwakis, worked them long before the whites arrived. All Indian claims have long since been bought. All along the line running from St. Louis to [the] Wisconsin [River], one finds remains of old Indian earthworks and perhaps buildings, often (the hills) built in long roads with crossroads or entrances. When Mr. Mitchell had some digging done, someone found, 15 miles from the mouth of the Fever River, a copper [implement] like a head breaker

but only about 7 to 8 inches long, 1/4 inch thick, in about [the] shape [shown here], which has probably been taken to New York. This is all the more remarkable since, except in the area of Lake Superior, no copper is found in that region at all. Near Cahokia, a French village about 10 miles downstream from St. Louis, there are also remains worth seeing.

At that time Mr. Mitchell was trading with the Winnebagoes and says they are an interesting, characteristic savage tribe who have preserved the characteristics ascribed to the savage men of that region of the Northeast. M32For information on the different tribes of the northern
Indians and those along the upper Mississippi and the
Great Lakes, as well as their French names, see volume 3 of
this journal, [manuscript] p. 141. They are powerful, handsome men, often wild and warlike. They cut their hair bluntly across above their eyes and also at the nape and the side of the neck. The Winnebagoes, Menominees, Sauks, and Meskwakis live close together and thus lend interest to that region, for which reason travelers should visit it.

At three o’ clock the Ojibwe arrived, accompanied by a Piegan. He was a tall, handsome, slender man with [a] reddish brown face and spots on his arms and body. He did not wear his hair in the style of his tribesmen, who cut it shorter. He was very lively and spirited, [and he] spoke much, rapidly, and loudly; with Deschamps’ assistance I could easily record his words. He had collected large quantities of the root that smells like Foenum graecum to sell to his countrymen, who pay a high price for a very small piece. He said his countrymen all wore blankets. He promised to come again the next day and allow himself to be painted then, for which he demanded a draught of whiskey. A crowd of Piegans listened to the words as they were pronounced and laughed not a little at them. From these word samples, one can see that many words, such as “ Mississippi, ” “ squaw, ” and others, have been borrowed from this language. M33This has already been discussed above. When he saw my Piegan quiver made of panther skin, he said that these are not found in his homeland. The French call these people Sauteurs; they themselves call the Crees Kristenoh, the Assiniboines Assinipoanack, and the Dacotas Poanack.

It was very hot, even as late as five o’ clock. The animals were panting for water. In our room the many Indians, who continually smoked and demanded tobacco, made us hot. The evening following the hot day was very pleasant, but toward night a strong, more and more parching wind arose. The two Spaniards returned; they had not shot anything. I went into the area surrounding the fort and saw the horses returning at a trot and gallop; they stirred up a thick dust cloud. Near the hills we saw a lone woman standing and heard her lamenting and crying from a distance. She was mourning one of her dead relatives and returned only when it was dark.

Dreidoppel and Papin returned late. They had killed a bighorn goat this morning and brought its skin back. On the first day they had ridden until nine o’ clock in the evening; they saw very many antelope; they shot but did not get any. M34They found a very large prairie dog village, larger
than any they had yet seen. In it lived small burrowing owls
(Strix cunicularia); Dreidoppel saw four of them and found
their droppings in large quantities in the burrows. Mr. Mitchell
has seen this owl on the La Platte [Platte] River; Long’s
party, in the prairies of the Arkansas River. They had not met any Indians at all. They saw a herd of seventy elk, then groups of nine, twelve, and then two. At night they slept where we recently went on an excursion with Mr. Mitchell. From there they rode farther downstream and shot this goat that stayed in the mist. It was shot at six o’ clock, and at nine o’ clock they stopped and ate for the first time on this tour.[Page 2:239] The Indian immediately butchered the animal and ate the kidneys and half the liver raw. Then they roasted the meat. They suffered greatly from the heat. In the evening Papin shot a buffalo bull, whose heart veins the Indian immediately devoured raw. Papin took little more than the tongue along.