21 August: In the morning, beautiful, bright sunshine. At 7:30, 65°F [18.3°C]. At eight o’ clock Dreidoppel and Papin, accompanied by a Piegan Indian, rode out hunting to shoot some bighorn. They [were] prepared to stay out a night or two and had taken a packhorse. Papin had no great desire, so he said, to undertake this dangerous enterprise. If he had not obligated himself to the company, he said, he would not undertake this ride for a hundred dollars. Bird came into the fort and gave me one of the strange cakes from the lakes onwhich the Indians prop their pipes.M30See the preceding [manuscript] page. I saw the shells, in their natural state, from which the Indians make their ear pendants. They are a Dentalium, probably entalis, from the banks of the Columbia and other rivers discharging into the ocean beyond the mountains. Our men were now occupied felling trees and sawing boards. Others had ignited a woodpile to burn charcoal. Mr. Mitchell gave me the dried skin of a fish (Acipenser), which someone had found along [the] shore near here, dead but still completely fresh. It had probably been killed by a falling tree or a collapsing bank.[Page 2:236] No one recognized this fish, and all our Mississippi fishermen unanimously agreed that it did not occur in the Mississippi. Its head is extended into a long snout (see my Zoological Diary, Pisc. No. [— —]). An Indian brought a freshly skinned beaver into the fort; only its head was still of use to me. Bird promised to send me an Ojibwe Indian, whom he had with him, so that the [Ojibwe] could give me [examples of] his language and [so that] Mr. Bodmer could draw him. At twelve o’ clock, 75°F [23.9°C]. In the afternoon an Indian brought me a stuffed bird that I had not yet observed and which does not appear to be included in Bonaparte’ s works either, a jaylike, ash-blue bird with sky-blue head. Bear Chief had not yet arrived; instead, an old man was drawn, PiochKiä́iu, M31In German, der entfernte Bär [Distant Bear]. who wore his hair in front tied together in a thick knot.

The afternoon was very hot. Indians in large numbers were bathing in the river; one even saw many women, girls, and children swimming in it. They swam to the keelboat and jumped from it into the river. The noise they made [doing this] was very loud. Three to four to five Indians continually sat in our room. One constantly had to fill their pipes. They are too lazy to get up to get fire; I had to light even my own pipe for them. It was no different in the remaining rooms of the fort, especially in the room of the old Berger, with whom they could communicate well.

Someone caught a fish (catfish), which carried in its stomach a large, nearly 5-inch-long and 4-inch-wide flat stone rolled smooth by the water. The evening was very pleasant. 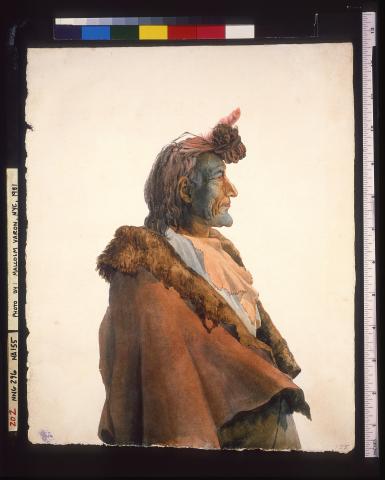