20 August: Early in the morning, overcast sky, rather cool, [with] dark clouds.[Page 2:235] Several [tipis] close to the fort were taken down and moved into the woods near Bear Chief’s [tipi]. Their travois were all arranged this way for horses [see fig. 12.11]. The two long spruce poles, ‘e’

and ‘f’, are tied together at ‘a’ with leather straps. [At] ‘b’ there is a wide leather strap, which rests on the horse’s back like a saddle. [At] ‘ccc’ there are three crosspieces tied over [the frame]—in some cases without second crosspieces; in others, [as at] ‘dddd’, provided with [additional] cross bars. At ‘gg’ the poles are wrapped with leather straps. They are the length of medium-size [tipi] poles. Those for dogs are somewhat shorter, and in the place of the crossbars ‘ccc’, one attaches to the [frame] an oval object, an elongated hoop, over which leather straps are stretched in the form of a net. This is a practice of the Blackfoot and the Assiniboines as well as of the Dacotas, Crows, and other nomadic nations.M28The Piegan name for these travois is manesti (“nes”
softly and without stress). 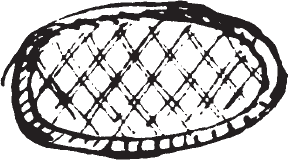 At 7:30, 66 1/2°F. Yesterday and the day before, Mr. Bodmer had begun drawing the son of the old Kootenai, Hómach-Ksáchkum, a handsome young Indian. It will be completed today. His name is Makúie MakúiePóka (l’ enfant du loup), and he is a very elegant, finely attired Indian, half Piegan, the tribe to which he also considers himself to belong. The man with the big medicine pipe (calumet) came, and some drawing was done. Later he received some ribbons and decorated his pipe stem with them. At twelve o’ clock, 70 1/2°F [21.4°C], windy as well, and the dust was flying about. Bird had lunch with us, and we agreed that now was the most favorable time to shoot bighorn along the river, somewhat farther downstream, in the vicinity of the Stone Walls. Tomorrow Dreidoppel will therefore probably leave with a hunter on a journey by land. Today the old Kootenai and his son and wife had ridden on very good horses to the camp of the large Piegan band. They will return in a few days, and then their drawings will be finished.

In the afternoon I obtained skins of a mouse or hamsterlike animal from the prairies close to the Rocky Mountains. They were dyed partly bright red; this is done by the Indians. When they dye things red with a certain bark, they place these skins in between, and the [skins] take on this color. They dye things yellow with beautiful yellow lichen ([— —]).M29This moss does not grow around Fort McKenzie:
[only] on conifers. The Piegans bring it down in large
amounts from the Rocky Mountains. It produces a beautiful
yellow dye. Bird ate lunch with us and told us much about the mountains and the Indians. Probably no one knows these people better than he, for he is a true Indian. This afternoon there were between forty [and] fifty Indian tipis around the fort; from time to time we had sixty and more Indians in the fort at the same time, though mostly women and children. In the evening it was a delightful sight when the horses of the fort were driven home in a big herd at a trot or a gallop. There were eight armed men behind them and on the sides, and because many Indian horses were among them, five or six armed and mounted Indians also took part. The entire cavalry arrived in a dust cloud from the prairie and then moved into the fort. Evening pleasant. Beginning of moonlight.