11 August: In the morning, good weather, warm, some sunshine. At 7:30, 63°F [17.2°C]. Very early in the morning, the rumor went around in the fort that the Blood Indians wanted to kill the whites and take the fort. The faithful Piegans, with Spotted Elk—or now, rather, Bear Chief—at their head, came into the fort and spoke at length and earnestly with each other. The fort’s horses had been driven out but were soon brought back again. The Blood Indians had attempted to take them away; they had seized one of them, but it had been taken away from them by pursuit. A few hours later, these horses were driven out again; six armed men were appointed to watch over them. This much of the rumor was true: that the Blood Indians, who are always very dangerous to whites, were infuriated and [would] withdraw. Several well-intentioned persons among them, including a strong, distinctive man with a fine otter-hide quiver, came into the fort and assured us of their friendship. At breakfast they also received something to eat.

This morning Mr. Bodmer drew the Piegan chief, la Chemise-de-Fer [Iron Shirt], who today, like yesterday, had painted his face black and red. His leather shirt was lined with rows of shiny buttons, trimmed on top with otter hide, [and] edged on the shoulders and arms with blue beads. His hair hung disheveled about his head; attached to the crown was a bunch of feathers of birds of prey [along] with white weasel skins, woodpecker heads and beaks, red flaps and cloth strips, and the like. We received visits from several Indians. A Blood Indian brought his wife, who gave me a gift of black berries (poires); in return I gave her tobacco and bought from them Indian tobacco and a pouch. The tobacco is brought down especially from the Rocky Mountains. Later I made various small purchases, including a beautiful quiver of panther hide and a chichikué, the maraca of the Tupinambi, made of leather or parchment.

At twelve o’ clock, 72°F [22.2°C]. Today the sun was very warm, hot where the light wind did not reach. After lunch Mr. Mitchell suggested that we take the boat across the river to visit a Piegan chief who arrived there today. This man was a friend of the whites in the fort and had left his band for a short time to hunt beaver. He had sent off a young man to announce his arrival; he was supposed to lead us to the [tipis]. We left the fort at two o’ clock and saw that very many [tipis] had already been taken down. The river and its banks were teeming with Indians, who were mostly enjoying themselves swimming. They ran over the barge (keelboat) lying in the river and jumped from it into the water.[Page 2:227] Their manner of swimming is exactly like that of the Brazilians, with one arm after the other reaching forward. They were all excellent swimmers. One saw beautiful, slender young people, and their color was a very darkly shining reddish brown. One can really describe them as copper-colored, more so than the Brazilians, whose color is usually more yellowish brown or grayish brown.

We crossed the river in a big canoe with several Indians and then followed the narrow sandy shore under the high clay hills, where one finds interesting shell impressions. From the landing place, it was not far to a small ravine in a cottonwood thicket where we found several pitched leather [tipis]. The chief M10His name is Kutonä́pi (Old Kutonä). sat in the background awaiting us; the remaining Indians fired their guns upon our arrival. We went into the small hunting [tipi], which poorly sheltered us, and sat down on buffalo hides. The entire household—four or five men and a large number of women and children—crowded into the doorway to see us. About fifteen or sixteen horses were grazing around the [tipi]; many a prosperous Piegan owns up to twenty of them. The first thing we did was to shake hands with the men. Then someone handed us a wooden bowl with very fresh water, and we drank. Mr. Mitchell passed out some tobacco and gave the chief a small bottle of whiskey. When he received it, he immediately intoned a song or hymn to thank the Great Spirit, Natohs, whom they worship [as] the sun, for this precious gift. Then he drank and also gave the other men a swig. [Next] a wooden bowl, in which there was cooked beaver tail and pomme blanche, was placed before each one of us. The beaver tail, when it is cooked quite tender, does not taste bad; in the United States it is regarded as a delicacy. When we had eaten some, we passed the bowls on, and the Indians also ate some of this dish.

When we had finished eating, the chief brought out packages of beaver pelts, beautifully bound together with leather straps, and presented nine pelts to Mr. Mitchell. His son gave me a beaver while he endlessly shook my hand and thanked me for having come from so far to visit them. The interpreter, a Spaniard, translated what I said to them. The beaver skins from these people were well preserved and completely cleaned of fat, like parchment. They liked my double-barreled gun. The son wanted to shoot it; the right barrel was loaded with a bullet, and this was done. The old women smoked with us before the door. A crowd of small children were quite dark brown and very neat. All the men’s leather suits were very clean and quite simple; since they were not dressed in their better clothes, their hair hung down unadorned. 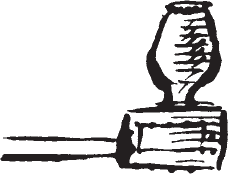 The pipe we smoked was made of blackish gray stone in this shape [see fig. 12.5]. They often own some made of olive-green stone.

After the chief had announced to us his [impending] visit to the fort, we left the [tipi] and returned to the fort. Here the scenes of barter and bacchanalia were soon renewed. The Indians arrived, each one with a little keg, and gave every useful thing they owned for their favorite beverage. Many came in singing and dancing and offered their women and girls for whiskey. Others brought horses, beaver skins, and other pelts, and we witnessed indescribable scenes. In general it must be said that these Indians, even when drunk, behaved better than all the others along the Missouri. As soon as they had whiskey, they went back to the camp, and the greatest part of them left today. Others will follow tomorrow. During the evening, in and around the camp, we also witnessed comical scenes: they scuffled with each other about their whiskey; young and old got something to drink, and here and there were quite small children who could neither stand nor walk. In the fort we saw interesting scenes: small boys took turns holding dead mice and shooting them out of each other’s hands with arrows. At another place we saw a woman with four or five children, dividing up meat for them.[Page 2:228] The smallest one could not yet chew but still received his little piece of meat. The evening was calm and pleasant. The Indians provided us with much entertainment. 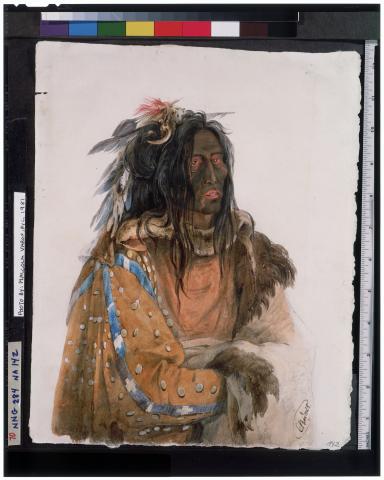