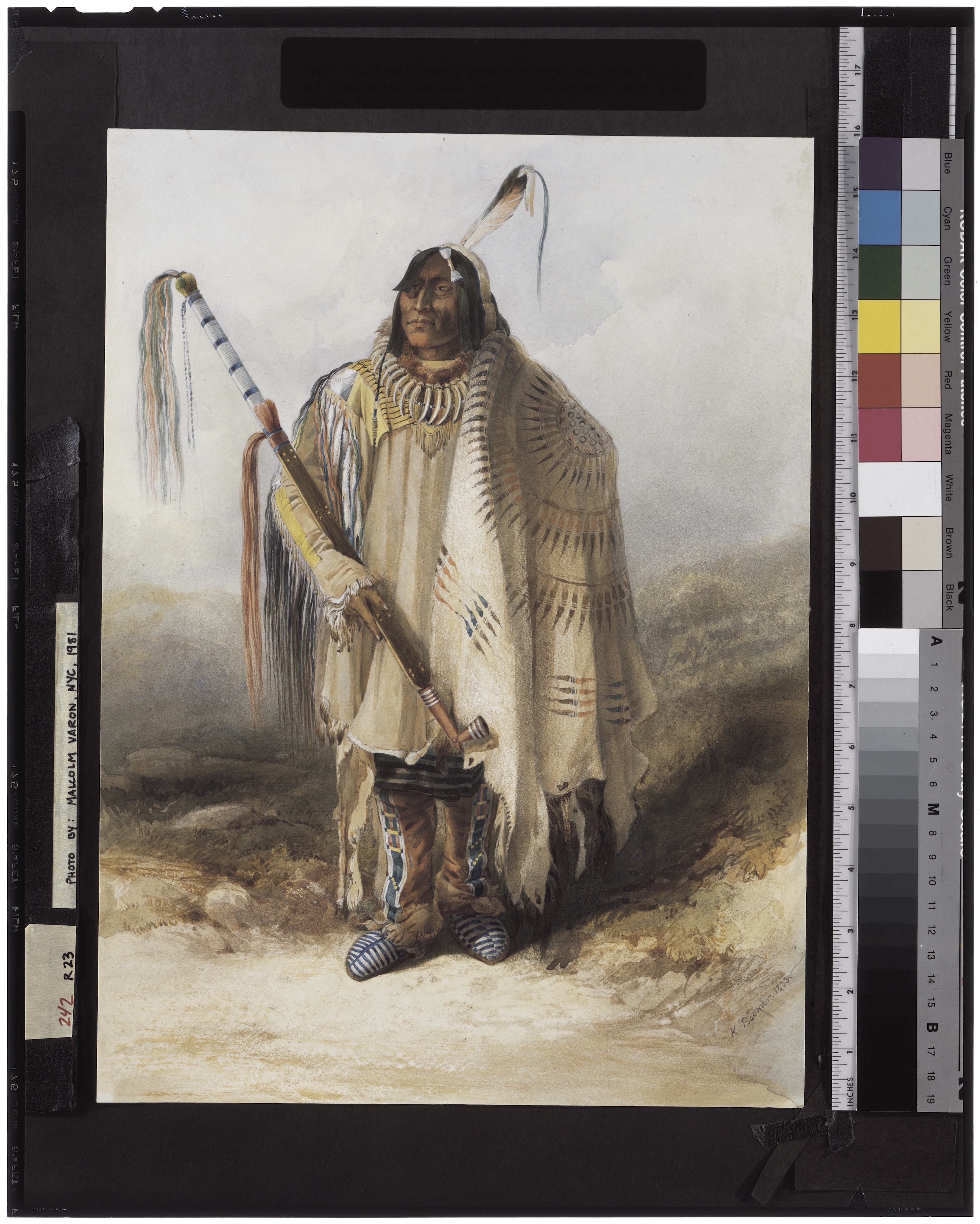 George Catlin included pictures of Péhriska-Rúhpa ("Two Ravens") and his wife in his Indian Gallery, and two portraits of this Hidatsa man after Bodmer were published in the aquatint atlas: Tableau 17, based on the watercolor shown here; and Tableau 23, a full-figure version of the portrait reproduced in the following plate. Péhriska-Rúhpa was a warrior and evidently a leader (a head chief according to Catlin), but neither Catlin nor Maximilian recorded his accomplishments as they did those of Mató-Tópe. Péhriska-Rúhpa was proud of his dress and spent a long time preparing himself for each of the several times he posed for Bodmer. Much of his best clothing, apparently including the shirt worn in this picture, had been obtained from the Crows, a tribe renowned for their finery. The shirt is trimmed with bands of bright yellow quillwork and is very elaborately fringed with ermine, locks of human hair, and dyed horsehair. He also has on a striped woolen breechclout and quilled leggings. Leggings were made of the entire skin of a deer or similar animal. The soft, tanned skin was simply folded and sewn to make a tube that would encase the leg. The hind leg portions were attached to the belt; the foreleg flaps were left to trail decoratively at the heel or tied neatly around the ankles as shown here. Around his neck Péhriska-Rúhpa wears a necklace of grizzly bear claws fastened to an otterskin band and spaced with blue and white beads. Such necklaces were highly prized and very expensive. Only the claws of the forepaws were used, preferably from animals taken in the spring when the claws were large, comparatively unworn, and showing white tips. These necklaces typically had long otterskin and cloth trailers at the back, not visible in this portrait. As reproduced in the aquatint atlas this portrait was captioned "Péhriska-Rúhpa, Minitari [Hidatsa] Indian." In the 1906 Thwaites edition of Maximilian's narrative, the subject is wrongly identified as Mandan.